In November 2010 we celebrated our 10th anniversary!

The outcome of our 10 years of activity is rather impressive:

It all began in the hot summer of 2000, when we met the girl named Svieta. Who would have thought we’d still be active in 10 years time? Probably not many, and certainly not us. In fact it is thanks to your great help and support in all of its forms in all those years, that we were able to assist those in need. Thank so much!

We celebrated the 10 years anniversary with a typical ‘St-Martin’ meal on November 21st, 2010 in Saint-Brais (Jura, Switzerland). 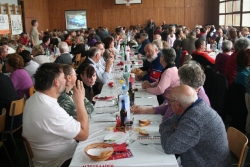 St. Martin meal at the gymnastics hall in Saint-Brais

Thanks to your kind and generous ongoing support we will continue for another 10 years and more! 🙂